WHILE we are all busy doing tax returns for our website businesses, Business Activity Statements, Company Tax Returns, Personal Tax Returns (or should be anyway) – we wonder what they did in the good old days. Well, it seems that governments have never been short of ideas for getting in revenue.

Between 1784 and 1811, the British government levied a tax on the sale of hats. A graduated scale existed, ranging from 3d (on hats costing less than 4s), to 2s (for hats costing more than 12s).

Purveyors of hats were obliged to purchase a Licence (£2 in London, 5s outside), and to display a sign proclaiming them a Dealer in Hats by Retail

To enforce this tax, duty-stamps were printed which had to be pasted into the lining of every hat. Evasion of the Hat Tax, by retailer or hat-wearer, was punishable by a fine; forgery of hat-duty stamps was ultimately punishable by death.

For some curious reason, the tax applied only to men’s hats.

Similar taxes of the time included:

Perhaps the best-known duty of this type is Window Tax, levied first in 1697 to replace revenue lost through coin-clipping. Initially, nearly every house was charged 2s; properties with 10-20 windows paid 4s; and those with more than 20 windows paid 8s.

These charges soon escalated, and consequently the practice of `stopping up’ became common. Windows were exempt from the count if they were permanently filled with materials matching the adjacent walls.

Inspectors would regularly count exposed windows and ensure any stopped windows had not `broken out’. Over time, the tax grew more unpopular since it became increasingly iniquitous, and it deprived residents (especially those in already disadvantaged areas) of daylight.

In 1851 the Window Tax was abolished. 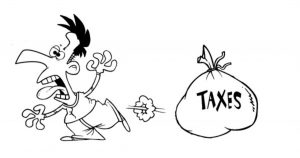